This is just a simple cheat sheet I'll likely expand over time to capture all the useful information pertaining to fibre optic communications. 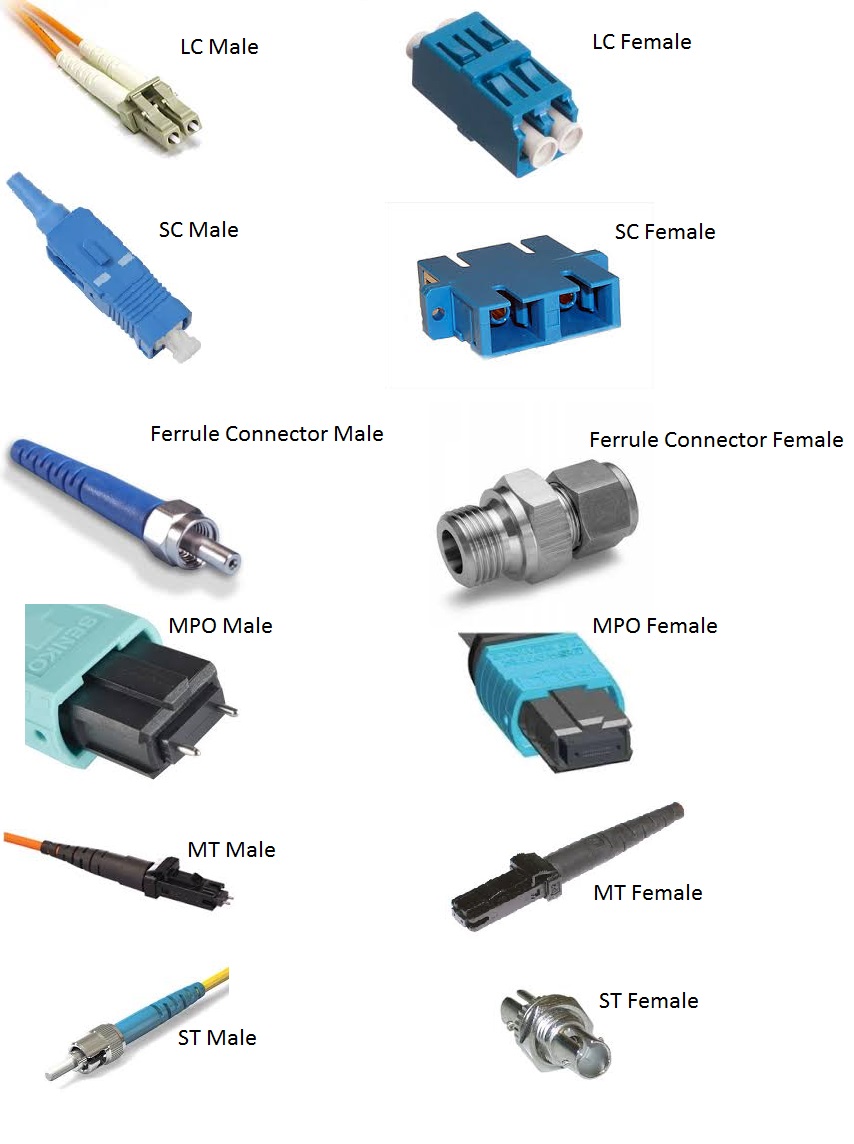 The most common data connectors are outlined below

Lucent Connector
Typically used for 4Gbps+ Fibre Channel and 10Gbps Ethernet communications. Most structured cabling within a data centre these days uses LC, a converter may be required for other connector types on equipment.

When running cabling within a DC, there are two methods for configuring cable polarity.

Single paths (e.g. for duplex WAN circuits) may still be presented on a duplex LC interface. These require Port 1 to match Port 1 all the way through the patching structure.

Paired fibres seem to confuse many cabling installers. It could be argued that every patch cable and structured cable is crossed over (i.e. when looking at the LC end, 1 goes to 2 and 2 goes to 1). This has been the cause of failures when deploying new infrastructure on multiple occasions. If a link light doesn't appear when connecting a device to a switch (or device to device), particularly if the structured cabling is new, this is definitely worth checking. If you have access to a visible laser, run it end to end down the optical paths to confirm all paths are configured correctly. 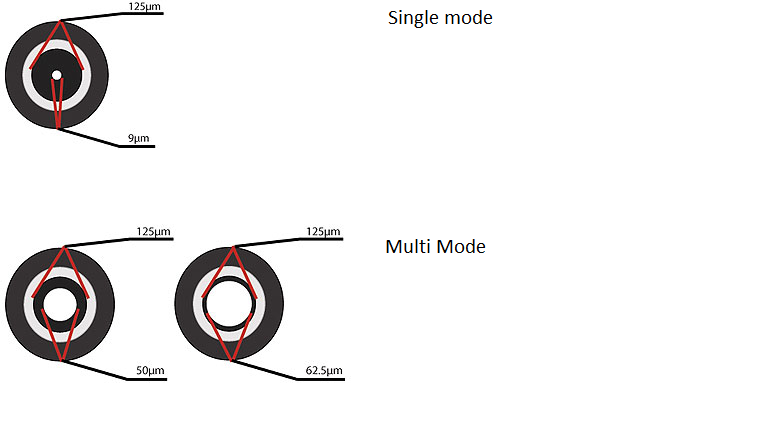 A "Mode" refers to the type of light transmission down an optic fibre. Single Mode means there is only one light signal propogated down the centre of the fibre. In Multi Mode communication, light can travel directly down the fibre (without reflection off the sides of the fibre) and light can also travel as reflected signals.

Visible light is between 400nm and 700nm. Sometimes it seems that an 850nm SFP transmission is visible (perhaps due to a broader spectrum transmitter than strictly 850nm), however for the wavelengths used in Fibre Channel and Ethernet communications, the primary spectrum (>800nm) is NOT visible to the human eye. Eyesight damage may occur if looking directly at an SFP or an active cable, even though you may not see the light.

An older digital camera (e.g. iphone 4) is susceptible to infrared light and can be used to check for short wavelength light. Otherwise, find another method of testing

Certain windows and bands of wavelengths have been tested and found to be suitable for transmission of light with lower signal loss. The below table was sourced from http://www.rp-photonics.com/optical_fiber_communications.html - these specifications are broader than pure Fibre Channel and Ethernet purposes.

Fibre Channel communications are far more efficient than Ethernet frames as a dedicated fibre channel switched fabric does not have the same challenges to overcome as a broader ethernet network. For starters, Routing isn't required, the protocol stack is thinner (e.g. TCP/UDP ports don't apply), and IP/MAC translation isn't required. Therefore, comparing 1Gbps Ethernet with 1Gbps Fibre Channel isn't really "apples for apples". Still, below are the main speed milestones for each approach:

"Dense Wave Division Multiplexing"
This is an optical multiplexing technology which facilitates an increase in bandwidth, supporting multiple types of signals across a single optical fibre simultaneously. This is achieved by encoding each individual signal to transmit on a different wavelength. 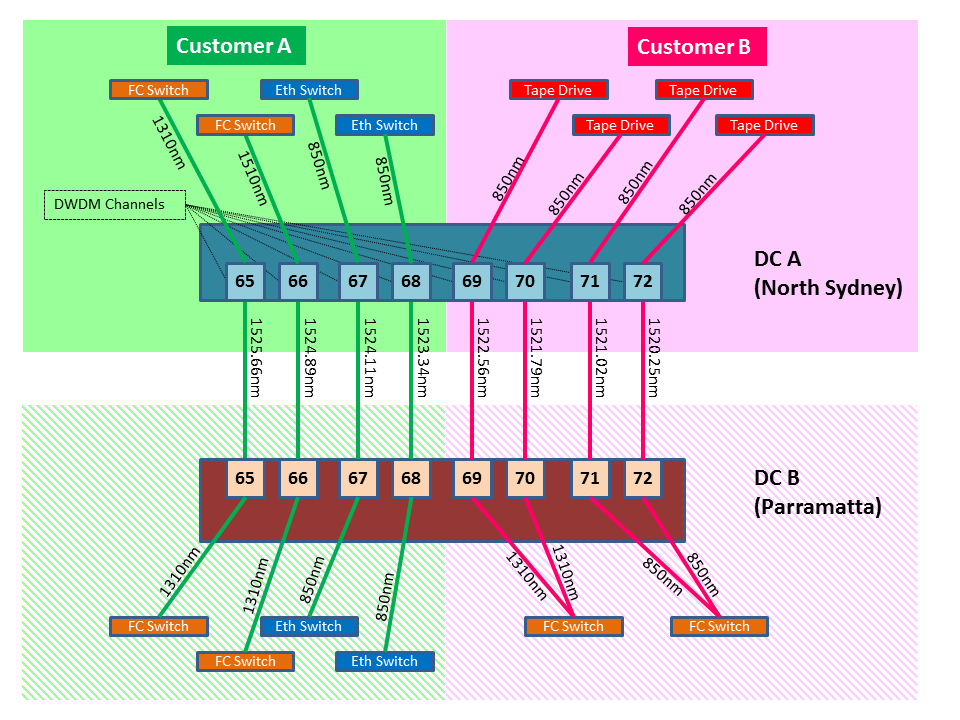 In the above diagram, Customer A could use the same single long distance optical fibre to connect multiple FC switches between two sites, plus multiple Ethernet switches. Each incoming/local signal (e.g. 850mn) is converted to a DWDM signal and retransmitted on one of the DWDM Channels. The channels are multiplexed and transmitted over the same long distance cable. This technology is widely used by telcos to support multiple customers over the same physical cable, so as to avoid needing to run large amounts of high-cost optical cables, individually for each circuit

These are pluggable modules which convert a signal from copper transmission (for shorter distances) to optical (supporting much longer distances). GBICs support gigabit transmission, therefore are more prevalent in older ethernet switching topologies.
Specifications are normally printed on the GBIC label 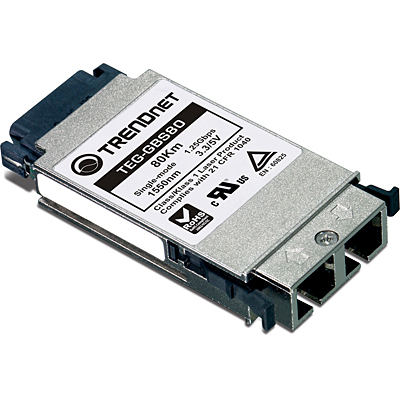 In the above image, this GBIC supports transmission up to 80km using a single mode transmitter at 1550nm.

GBICs are available in single-mode and multi-mode, depending on the requirements for the optical circuit.

The optical interface is SC

These are smaller than GBICs and support higher transmission speeds. Typically

Multiple modes of operation (single-mode, multi-mode, etc) are supported, depending on the SFP (but a single SFP will only support one mode of operation)

Specifications are normally printed on the SFP label

The optical interface is LC